“ We relied on Woosmap for offering localisation and information on food bank services for families in need during the pandemic. The Food Finder helped enhancing access to information and contributed to the community awareness of the services. ”

“ Woosmap was used to create an interactive website localising charities, local authorities and food banks to enable easy access to vital food relief services for families during the pandemic. ”

London-based The Food Foundation is on a mission to change food policy and business practices to ensure everyone in the UK, regardless of their economic situation, can afford and access a healthy diet. And here at Web Geo Services we made it our mission to lend them a technological hand to achieve this.

- Woosmap Back Office - for Woosmap of adding, deleting and editing of food charity locations

A vision and a voice

During the past year, the work of The Food Foundation has grown in prominence and influence, as the devastating economic impact of the COVID-19 pandemic on child food poverty levels in the UK became apparent. As Manchester United and England national team footballer Marcus Rashford emerged as a leading voice for the issue, he relied heavily on research and data from The Food Foundation to lobby the UK government about the need to continue to provide school meals to children during the pandemic.

“Rashford used his platform, his voice and his social media following to build a campaign and to start making some noise, […] and so he used a lot of The Food Foundation’s research and data to back up his statements.”outlines Bogan.

Rashford continued to use his influence, creating the Child Food Poverty Taskforce which was made up of large food businesses and retailers. Meanwhile, the Food Foundation created a coalition of charities operating in tandem to put pressure on the government. Basing their actions on three key recommendations from the recently released National Food Strategy, the groups intensified their campaigning on social media. “We needed to build a website so that we could explain to people why we were campaigning, what the movement was around, what the issues were and what we are asking for from the government,” says Bogan.

As the campaign gathered pace and prominence in the second half of the year and the government continued to stall its response, local authorities, food banks and organisations stepped in to provide food services for those in need. “At that moment, we decided that having a digital tool that could map out these responses would be really useful so that people around the country could see the emergency food responses in their local area. So, we built a basic tool using Google Maps called the Kids Meals Map. The idea was it was tracking all of these different offers,” comments Bogan. 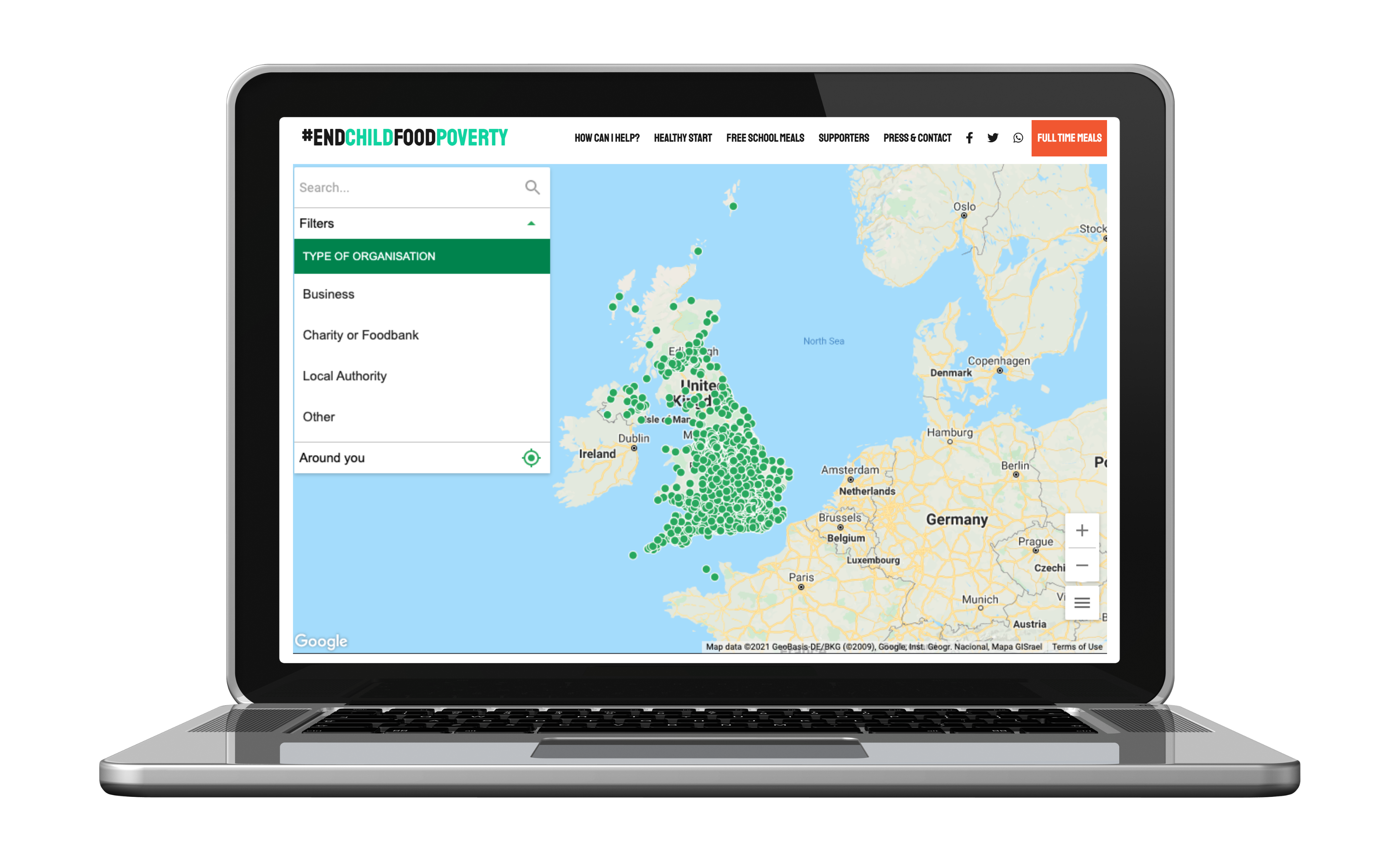 With Christmas on the horizon and still no concrete response from the government, The Food Foundation and its partners realised that embedding the website with a robust localisation tool that would enable people to easily find local support services was crucial. “Google basically said you should be working with Web Geo Services as they’re a Google partner. And I think they’ll be able to offer exactly the solution that you need […]. Introductions were made and pretty quickly we realised that this would be the perfect solution,” recalls Bogan. Web Geo Services provided consultancy and data workflow design around how to merge all the different data sources into a unified structure, to centralise food donations on a consolidated site.

The Communication Manager continues to explain “And actually, when they click on that point, they can see the hours at which the offer is active, specifically what the offer is, whether they need to go and register in advance or tell them that they’re coming. That’s why this ‘food finder’ map is such an important part of the website.”

The main challenge for the website developers was the volume and complexity of the data to embed into the ‘food finder’ tool. With this in mind, Web Geo Services established a workflow allowing easy and frequent updates, while the data structure ensured the rest of the solution would give a consistent customer UX.

With the data changing daily as more organisations joined the campaign, the task was further complicated by a pressing deadline: a BBC documentary on Rashford’s campaign to tackle child poverty was set to air, making it imperative that the website was launched and live for people to access it.

Web Geo Services worked closely with the Web Development agency to ensure the ‘advanced’ part of the Woosmap Store Locator Widget was understood and coded/configured in the optimum way. “It felt like a sprint. There were a lot of people working on this website: a web agency, there was Google, there was another PR agency, there was Web Geo Services. Everyone came together and we managed to pull it out of the bag and produce a website which was really high quality, with a highly useful tool for people that needed help,” says Bogan.

“One challenge was that we had a range of different data sources that we needed to mash together into something that was uniform, that spoke to the platform and that the Woosmap Store Locator Widget could process. That’s why it was really amazing working with Web Geo Services.”

Indeed, more than 1600 locations were uploaded to the database thanks to the Woosmap Store Search API. Web Geo Services also implemented a custom Back Office, in order to add, delete and edit sites without any technical knowledge, a real bonus for The Food Foundation.

Building on success to impact the future

The finished product — https://endchildfoodpoverty.org/ and its ‘food finder’ map — was a success, with The Food Foundation receiving much positive feedback and charities and food banks reporting spikes in their services following its launch.

“In terms of the amount of food they were able to offer, the website overall received really strong traffic because we had Marcus Rashford directing people towards it,” says Bogan. “It was vital and helped a lot of people, in particular over that winter period where it was tough for a lot of families in this country.”

“We’ve been doing progressive and pretty groundbreaking work in the UK. We’ve started branching out to projects on an international scale, thinking about how we can use our learnings from the UK to start food system transformation at a global level,” concludes Bogan.

Note: As the main focus of the ‘food finder’ was to provide access to vital food bank services during the winter holidays, currently the map is disabled from the website.